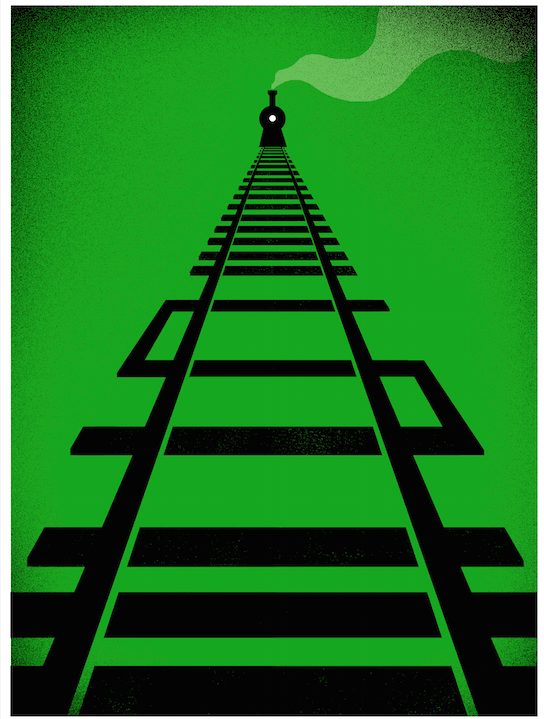 For much of the past two decades Canadian National Railway Co. has been credited with revolutionizing the North American railroad industry.

A theory of former company chief executive E. Hunter Harrison — of “precision railroading,” a data-driven focus on charging customers a premium for superior on-time performance — made him an industry icon and his shareholders very happy.

But in railroading, as in life, how one gets there matters.

Acting on a tip, the Southern Investigative Reporting Foundation began investigating Canadian National in the fall of 2014. Here’s what its reporting uncovered:

On the evening of Dec. 6, 2004, two longtime Canadian National railroad employees, track construction supervisor Scott Holmes and his boss, railroad construction chief engineer Daryl Barnett, were in an elevator at the Deerhurst Resort a few hours by car north of Toronto and on their way to their unit’s Christmas party when Barnett got a call from Manny Loureiro, his supervisor and then head of engineering for the eastern region.

Taking the call on speakerphone, Loureiro told Barnett that he was in a bind because the fiscal year was drawing to a close and his division’s budget was $12 million over what his then boss, Keith Creel, the eastern region director, had set. Missing his budget bogey would be a major blot on his performance review; it would also eliminate his eligibility for a six-figure year-end bonus. (Editor’s note: All dollar values expressed are Canadian dollars.)

To avoid this, Loureiro told Barnett to transfer $12 million to his unit’s account from a $28 million advance payment that a customer had recently made to purchase signal equipment.

Barnett tried to object but was overruled.

After the weekend when they were back at the office, Barnett told Holmes that Loureiro had requested a transfer of $2 million in addition to the $12 million.

A week later during a conference call that included most of Canadian National’s senior management, CEO Hunter Harrison singled out Loureiro for commendation, singing his praises for having obtained such a large payment from a key customer so late in the year.

Barnett and Holmes concluded that Loureiro must have met the requirements for the maximum bonus.

The customer was GO Transit, Metro Toronto’s commuter rail system, which merged five years later with Metrolinx, Ontario’s taxpayer-funded public transportation agency. The required signal equipment was installed but the $14 million was not returned to Metrolinx’s construction project’s account, according to a former unit executive.

(Loureiro has retired from Canadian National and did not respond to a message left at his residence. Barnett, who left Canadian National in 2008, is now Metrolinx’s director of railway corridor infrastructure. He did not reply to an email and a phone call requesting comment.)

On Nov. 30 of this year when the office of Ontario’s auditor general publicly released its 2016 annual report, a 38-page chapter detailed Metrolinx’s billing and rail-construction project-management practices over the previous five years. The auditor general’s staff concluded that both of Canada’s major railroads, Canadian National and Canadian Pacific, profited from Metrolinx’s lack of internal financial controls by marking up construction charges well above industry norms.

The auditor general’s investigation concluded that Canadian National had billed Metrolinx for new rail products but installed recycled ones from other tracks, that Canadian National’s labor prices were 130 percent above the industry average and that Metrolinx had been charged for projects that had nothing to do with commuter rail lines.

The money involved is real enough: The report stated that Metrolinx paid Canadian National and Canadian Pacific $725 million over the past five years and Canadian National’s projects were singled out as examples of bad news for Ontario’s taxpayers. On one project Metrolinx was charged an astounding $95 million for nine miles of track constructed on the Lakeshore West line.

Christine Pedias, a spokeswoman for the auditor general’s office, declined to specify how much each railroad was paid. It’s fair to assume, though, that the majority of Metrolinx’s construction payments went to Canadian National since most of Toronto’s commuter trains run on railroad tracks it owns or sold to Metrolinx.

Anne Marie Aikins, a Metrolinx spokeswoman, provided via email a statement from the agency’s president, Bruce McCuaig, “The Auditor’s report focuses on a small sample out of the many hundreds of projects Metrolinx is currently working on or has completed between 2011 and 2016.” Additionally, Metrolinx is “proud of its record” and taking steps to address the issues raised.

For its part, Canadian National spokesman Patrick Waldron reiterated to the Southern Investigative Reporting Foundation the statement it made to news organizations on Nov. 30 about the auditor general’s report, “CN is dedicated to transparency, fairness and accountability in all its contracts and projects with Metrolinx and Go Transit. Projects we have partnered on utilize rigorous construction management processes covering project specifications and budgets to deliver quality work with strict oversight.”

The auditor general also made a series of reform recommendations for Metrolinx that, if implemented, would save Ontario taxpayers money and thus hit Canadian National squarely in the wallet. These included carefully assessing labor and equipment estimates for “reasonableness” using industry standards as a benchmark prior to a contract’s approval, regularly auditing a project underway and assigning an inspector to monitor progress at construction sites.

Long before the Ontario auditor general’s office began its investigation, Canadian National was using Metrolinx as an automated teller machine, albeit one with no deposits required. Over 15 years executive teams have come and gone at Canadian National but the one constant has been the river of profit that its Toronto construction unit has been able to reliably wring from Metrolinx.

Determining how much Canadian National billed Metrolinx over the past two decades is difficult but considering since 2010 four separate land sales, Lakeshore West construction and ongoing maintenance contracts, it’s at least $1.1 billion, the majority of which likely went to operating income. In other words, Metrolinx’s long-running failure to properly scrutinize Canadian National emboldened it to charge prices so high that many of the construction and maintenance contracts amounted to almost pure profit.

The most audacious episode occurred from 2004 to 2008 when Canadian National’s construction managers developed a billing scheme that reaped hundreds of millions of dollars in profits and benefits through wildly inflating the cost of construction, according to documents obtained by the Southern Investigative Reporting Foundation and attached to ongoing litigation.

The project involved a track expansion project that Canadian National performed for Metrolinx’s Lakeshore West line, on a route that stretched about 40 miles from Hamilton, Ontario, to Toronto’s Union Station. The work was completed in 2012.

Windfall profits and bonus payouts weren’t the half of it. In numerous instances Canadian National billed Metrolinx for work that Canadian National did for its own capital maintenance and expansion projects, saving itself many millions of dollars in expenses.

From 2004 to 2008, Canadian National did track construction work for Metrolinx on a 4.5-mile stretch between the Burlington and Hamilton stations, referred to by Canadian National as Lakeshore West/West. On a separate stretch of the same track in late 2009, crews began adding track to the 9.1-mile stretch from the Port Credit station to Kerr Street, or the Lakeshore West/East line. (The Ontario auditor general’s annual report discussed an unnamed 9-mile track extension that cost $95 million to construct “on the Lakeshore West corridor” but did not identify the project’s location or its date of completion.)

According to an email, Metrolinx had originally approved a construction price tag of $45 million, but in short order the project’s chief engineer, Daryl Barnett, in a bid to reduce costs, noted that the price tag had quickly ballooned past $70 million. Metrolinx’s spokeswoman Aikins did not answer repeated questions on the matter but the Southern Investigative Reporting Foundation obtained an April 2015 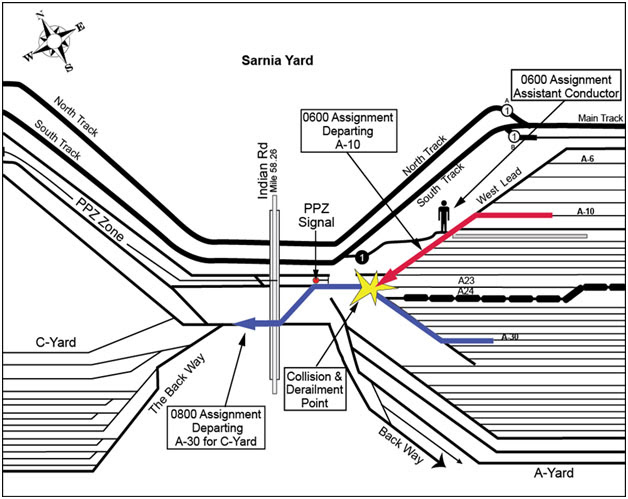 Sarnia’s ghost tracks, as well as the ones a few miles across the U.S. border in the Port Huron, Michigan, train yard, were central to Canadian National’s role in an odd 2010 episode that involved shipping biodiesel back and forth across the U.S. and Canadian borders to take advantage of a renewable energy tax incentive in the U.S.

A railroad’s on-time promise can be translated into substantial money.

A logistics consultant to industrial and agricultural clients throughout Ontario told the Southern Investigative Reporting Foundation that on-time promises are easier to fudge for railroads than for a trucking or air freight company. That’s because, he said, “Federal Express has to get it to your home or office door at a certain time; railroads only have to get it from one terminal to another,” where another train takes it to [a distribution facility] where trucks or ships pick it up.

Practically speaking, overpaying for on-time performance, said the logistics consultant (who wouldn’t consent to his name being used because he said he does business with Canadian National), amounts to paying slightly extra for Canadian National’s so-called Series 100 trains, its fastest freight movers, to depart from one terminal at 5 a.m., for example, when it really leaves at 10:30 a.m.

“Few are going to be the wiser because the trains to the [distribution] facilities always leave hours after the scheduled arrival time,” he said.

Commenting on the money to be had in charging for an arrival at a terminal that may not happen as planned, the logistics consultant said, “If Canadian National, or any railroad, can pick up an extra $50 a car load from a customer on certain trains,” then that would translate into “an easy $50 million per year, maybe more.”

The problem, he concluded, is “the volume customers are the smartest about how ‘the system’ works and have the leverage to strike deals after competitive negotiations.”

The Southern Investigative Reporting Foundation repeatedly sought comment from all the people named in this story. Without exception they declined.

Canadian National spokesman Patrick Waldron was provided with the documents referenced above and declined to comment on questions submitted to him, apart from reiterating the railroad’s comment on the auditor general’s report. He did note that in 2013 Canadian National had issued a public rebuttal to certain claims that Holmes had made in his ongoing litigation.

by Roddy Boyd, The Foundation for Financial Journalism
December 12, 2016