Few things vex a publicly traded company’s managers more than the prospect of admitting a mistake.

To acknowledge an error risks a stock selloff, bad publicity and possible litigation, as well as reduced executive pay and maybe even a few resignations. The alternative — covering up the blunder — could turn what is a professional embarrassment into a potential regulatory headache or even a criminal investigation.

The leaders of Penumbra, an extraordinarily successful Alameda, California–based manufacturer of neurovascular devices, have recently found themselves on the horns of this very dilemma.

Some surgeons have alleged that while they attempted to remove blood clots from patients’ brains, Penumbra’s newest catheter would occasionally break or fray, resulting in precious minutes spent addressing the fracture.

Penumbra’s answer baffled them: The company did not acknowledge the problem in any meaningful way; yet it did not fully deny it either. 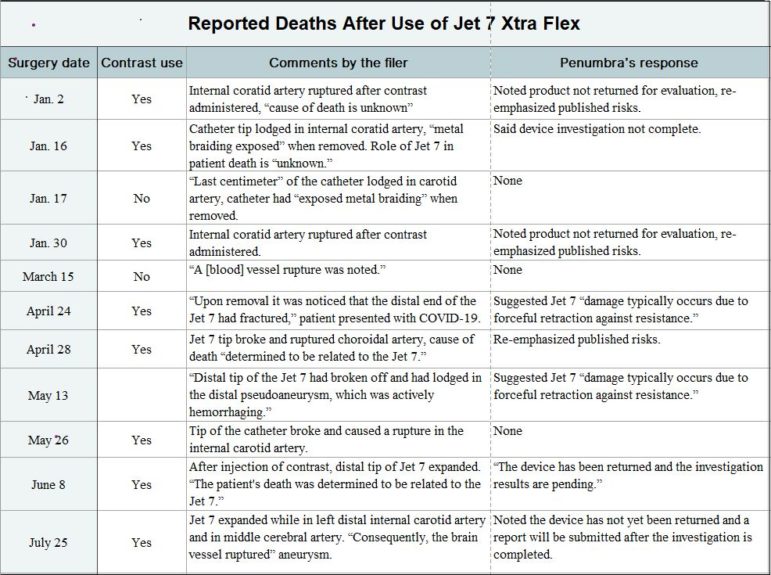 Barry added, “Following our investigation into the reports, we worked diligently to communicate directly with physicians.”

A formal investigation is not required before someone submits a MAUDE entry. And only two of the 11 reports concerning 2020 procedures ― entries about surgeries on June 8 and April 28 ― overtly alleged that the fatalities were linked to Jet 7 Xtra Flex problems. Three other entries categorized the relationship between the Penumbra catheter and a death as “unknown.”

Nine MAUDE entries describing 2020 operations, however, claimed the Jet 7 Xtra Flex either fractured or expanded shortly after a surgeon began a cerebral angiography. In the latter type of procedure, a catheter is injected with an iodine contrast dye to make the artery ― and the clot ― visible on X-rays. Angiography has been a standard component of clot-removal surgery for years.

To be fair, the Jet 7 Xtra Flex’s label — rendered in small print — clearly warns against injecting contrast dye into the catheter and also recommends it not be used with non-Penumbra products. Plus, anyone undergoing neurovascular surgery after having a stroke or an aneurysm is indeed at a heightened risk for having numerous complications, including death.

But Penumbra’s insistence that its catheters are safer to use when paired with other Penumbra products flies in the face of current medical practice, according to three neurovascular surgeons interviewed by the Foundation for Financial Journalism. (These doctors spoke on the condition of anonymity due to their employers’ prohibitions on talking with the press, and one surgeon had even received speaking fees from Penumbra.) All three doctors said use of Penumbra’s aspiration catheters with non-Penumbra devices is a “nearly universal practice” of surgeons performing thrombectomies.

“I like the Jet 7 [Xtra Flex catheter] well enough,” said one of the three physicians. “But I don’t like nearly anything else [Penumbra] has out. So I use a microcatheter, stents and coils from other companies.”

All 11 MAUDE reports detailing 2020 procedures referred to this mix-and-match practice. The entry about a March 15 operation, for example, noted the doctor had used a Jet 7 Xtra Flex alongside “a non-Penumbra microcatheter and non-Penumbra revascularization device.”

Since surgeons who treat strokes tend to live by the creed “time is brain” (meaning speed is of the essence when trying to prevent long-term neurological impairment), they are unlikely to want to swap out a Jet 7 Xtra Flex (after performing a suction thrombectomy) for another catheter to do the angiography.

Penumbra’s Barry, however, insisted that injecting contrast dye into an aspiration catheter is exactly what doctors should avoid doing. “Reperfusion catheters are designed for the removal of stroke-causing clots by aspirating or suctioning the clot out of the arteries in the brain, and not for contrast injection,” Barry said. Using the aspiration catheter for the dye task runs the risk of reintroducing a clot into the brain’s arteries, which could prompt an additional stroke, she added.

Two of the three surgeons interviewed by the Foundation for Financial Journalism said they do change catheters when performing an angiography during a suction thrombectomy. “But there is an expectation that the [aspiration] catheter can withstand an injection,” one doctor noted, adding that at times using the same catheter for both tasks is clinically valuable.

New wrinkles in the competitive landscape


Maybe the most problematic aspect for Penumbra concerning MAUDE lies with what is not described there: deaths related to competitors’ aspiration catheters. MAUDE carries no entries (filed through July 31) for Medtronic’s React 68 and 71, Stryker’s AXS Vecta 71 and Terumo’s Sofia Plus aspiration catheters.

And a key Penumbra competitor has seized on Jet 7 Xtra Flex’s troubles as a marketing opportunity. Medtronic has been running a digital advertisement on its neurovascular unit’s LinkedIn page, touting its aspiration catheter’s ability to “manually deliver contrast injections.” The logic behind Medtronic’s running the ad is simple: While few surgeons probably spend much time on LinkedIn, Penumbra sales staffers — unaccustomed to marketing a device whose safety profile is being questioned — might be weighing their career options, and some of them may be tempted to defect.

Medtronic’s sales in Japan are being helped by what Pugh described as a “voluntary recall” of Penumbra’s Jet 7 Xtra Flex, she said. “There’s a void in the marketing of [Penumbra’s] product in Japan” that has created a built-in sales growth opportunity for Medtronic, she asserted. (Pugh’s candor may have been bolstered by the Piper Sandler event’s closure to the press.)

Asked about Pugh’s description of a “voluntary recall” in Japan, Penumbra’s Barry replied, “No, this is not true. The product has not been recalled in Japan.” Penumbra’s Japanese distributor “paused sales” while her company updated the Jet 7 Xtra Flex’s “instructions for use,” she said. After Japanese regulators approve the catheter’s new instructions, the device will be restocked, Barry claimed.

The Japanese market accounted for 7.8 percent of Penumbra’s sales in 2019, or $42.5 million, according to its annual report.

by Roddy Boyd, The Foundation for Financial Journalism
September 14, 2020