To recognize what Myriad Genetics is today, it’s important to understand what happened on June 13, 2013.

The day began with Myriad having a patent-protected monopoly — its 2013 income statement is a testimony to the benefits of having no rivals — and a fearsome reputation for ruthlessly enforcing its patents.

Myriad had been awarded patents in 1994 and 1995 for two genes associated with a risk for breast cancer. But by 2009 the American Civil Liberties Union and the Public Patent Foundation legally challenged this, claiming genes are naturally occurring and thus not subject to patenting and that breast cancer research was being curtailed because of Myriad’s patents. (ACLU lawyer Tania Simoncelli subsequently discussed the suit in a November 2014 TED talk.)

Late that June 2013 afternoon, the Supreme Court ruled 9-0 in the plaintiffs’ favor, with Justice Clarence Thomas writing that the act of “separating [a] gene from its surrounding genetic material is not an act of invention.” He bluntly added, “Myriad did not create anything.”

By the time Myriad’s executives arrived home that evening, the company’s entire business model had been upended, with three companies announcing their entrance into the hereditary breast cancer screening business; more followed.

Since Myriad faced competition for the first time in its existence as a public company, the only certainty in its future seemed to be declining profits. But somehow Myriad’s stock price wasn’t decimated that day; it spent much of June 13 lifted by as much as $4.50 before plummeting 5 percent by the market’s close, to $32.01. (The month concluded with Myriad’s stock changing hands to land at a figure 20 percent lower than June 13’s $33.87 opening price, but the decline was orderly and played out over two weeks.)

That June Myriad demonstrated its genius for issuing remarks that are simultaneously absurd yet legally defensible. Consider the company’s statement on the Supreme Court ruling, released on June 13 at 12:25 p.m. EDT, headlined “Supreme Court Upholds Myriad’s cDNA Patent Claims.” The decision did allow patent protection for synthetic DNA, also called complementary DNA or cDNA, but this was a mere sideshow in the multiyear legal battle over whether genes could be privately owned. (The New York Times and The Christian Science Monitor discussed the ruling in starkly different terms.)

To meet the new challenge, Myriad did two things: It went on a five-year, nearly $900 million shopping spree in a bid to diversify its business line and started pleading for help in Washington, D.C.

The latter route appears to have been the most effective one.

For most companies, gaining legislative support or regulatory breaks in Washington can take years. But Myriad found relief in six months. To be fair, it had the advantage of being headquartered in Salt Lake City, squarely on the turf of a long-serving and powerful senator, Orrin Hatch. Until his retirement last week, the Utah legislator had chaired the Senate’s Finance Committee, which oversees the Food and Drug Administration’s budget and programs, including Medicare.

And Myriad, the first company to commercialize hereditary cancer screening in the mid-1990s, needed every last scintilla of a break it could get since its business was beset on all sides. A slew of new competitors had emerged, offering genetic screening for breast cancer at prices well below Myriad’s $3,000 price tag. The hammer stroke came when the Center for Medicare and Medicaid Services announced in December 2013 that it planned to trim its reimbursement for testing for the BRCA1 gene to $1,440 from $2,795.

The point man who pressed Myriad’s agenda in December 2013 wasn’t a K Street lobbyist but rather Daniel M. Todd, a staffer for Sen. Hatch who specialized in health care finance. Todd was no stranger to working very closely with large pharmaceutical companies to draft legislation, according to a January 2013 New York Times article.

Todd pushed the Centers for Medicare and Medicaid Services to amend its plan to cut its reimbursement for Myriad’s breast cancer genetic variant test. He made enough of a racket about the issue that Jonathan Blum, the agency’s deputy administrator and a self-proclaimed veteran of a great deal of congressional meddling, detailed their heated conversation in an email to himself.

In fairness to both Todd and Myriad, the agency had unilaterally pushed through the price cut outside the “process” that Blum described Todd as being concerned about. What especially aggravated Hatch’s staff was the circumventing of the standard 30- or 60-day comment period for interested parties to weigh in on a proposed policy change. Such a comment period, of course, gives any affected company some time to reach out to its stakeholders.

Blum’s account of the pressure he claimed Todd brought to bear on him and that Sen. Hatch applied to Marilynn Tavenner, then chief of the Centers for Medicare and Medicaid Services, later emerged in Blum’s testimony in an unrelated insider trading case.

Todd, who has been paid $680,000 by Myriad since his 2014 launch of a health care–focused strategic consulting business, declined to comment to the Southern Investigative Reporting Foundation on the record.

Blum did not return calls or respond to an email seeking comment.

Tavenner, reached by phone, told the Southern Investigative Reporting Foundation she had no recollection of the lobbying incident. Her former agency’s press office did not reply to an email.

In the end, the combined efforts of Sen. Hatch and Todd proved successful: The Centers for Medicare and Medicaid Services held off on the planned cut to the reimbursement level and in April 2014 took the highly unusual step of announcing an upward “revising” of its reimbursement for the BRCA1 test, to $2,184 from $1,438.

The agency’s reversal worked out nicely for Myriad: According to Centers for Medicare and Medicaid Services data, the change in policy for BRCA1 screening resulted in almost $16.5 million more in reimbursements in 2014 and 2015.

The math involved is fairly straightforward: In 2014 the agency’s reimbursement for each of Myriad’s 14,113 BRCA1 tests administered was $506 more than it would have been if the cost cut had prevailed. This amounted to $7.14 million.

For 2015, using the same calculations, the reimbursement differential was $9.41 million.

The episode surely represents yet another example of influence peddling along the shores of the Potomac. But why would Hatch, a Republican with an almost 88 percent lifetime rating from the American Conservative Union and one who has long raised concern about rising health care costs, demand that the government pay higher prices for a test?

Following the money trail is a good way to seek answers. Since 2011 Myriad and its executives and lobbyists have sent $130,400 to Sen. Hatch, through donations to his election committees or two nonprofit foundations he’s associated with, the Utah Families Foundation and the Orrin G. Hatch Foundation.

Hatch established the Utah Families Foundation in 1990 to provide grants to civic institutions throughout Utah. The Orrin G. Hatch Foundation, founded in 2014, is raising $40 million to create a repository for the senator’s papers and an affiliated public policy institute. Both organizations have drawn scrutiny because of their practice of fundraising from the pharmaceutical and biotech industries, despite Hatch’s influence over medical policy.

Myriad’s support for Hatch while a senator can be neatly divided into two chapters: one before the intervention with the Centers for Medicare and Medicaid and the other afterward. From 2011 to 2013, Myriad gave $30,500 to Hatch’s campaign fund and his the Utah Families Foundation. But from 2014 through last year, Myriad’s support ballooned, with the company granting his campaign fund and foundations a total of $99,900; some $90,000 of that figure came in block grants of $20,000 and $25,000 to the two foundations. A representative for Hatch did not return a phone call seeking comment.

This isn’t the only benefit that Myriad has wrangled from regulators, though.

The company’s revenue seems to have been enhanced by an apparent billing loophole for reimbursement for its breast cancer screening tests from the Centers for Medicare and Medicaid.

In the United States, all medical procedures, tests and consultations at both public and private facilities are documented and tracked according to five-digit Current Procedural Terminology codes. When procedures and tests are introduced, evolve or fall out of favor, regulators revise these codes.

Marketplace dynamics and technical advancements have resulted in practitioners offering tests that screen for a large panel of genetic variations associated with many different types of cancer. The many entrants into the genetic testing field have created somewhat of a price war.

In 2017 the Centers for Medicare and Medicaid responded to this by introducing CPT code 81432 for multi-gene cancer screening, to be reimbursed at $838, as well as code 81433 for another such test, reimbursed at $542. Myriad argued, however, its multi-gene cancer panel is so different from its competitors’ that it petitioned the agency so that its tests could have a higher reimbursement. 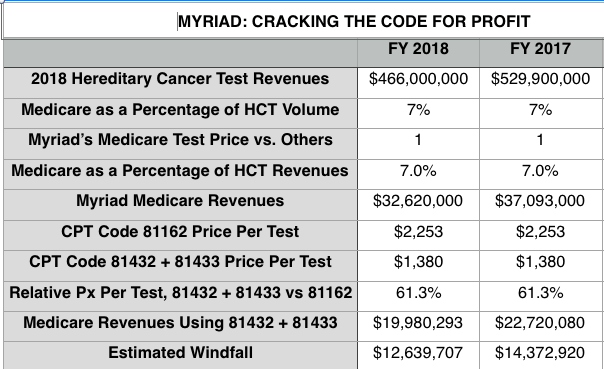 As demonstrated by the chart above, Myriad has benefited from the Centers for Medicare and Medicaid’s reimbursing an estimated $27 million over the past two years as the old 81162 code was used.

When Myriad CEO Capone was asked about this billing discrepancy at a March conference, he replied that since the Centers for Medicare and Medicaid has his company’s myRisk multiple-gene panel tests “under technical assessment,” the 81162 code will be used until the public is otherwise informed.

(A technical assessment is the Centers for Medicare and Medicaid’s process for analyzing commercial tests for accuracy and prognostic value. Former agency officials told the Southern Investigative Reporting Foundation that a standard technical assessment should be completed in less than six months.)

None of this explains why a website run by Centers for Medicare and Medicaid contractor Palmetto GBA, using the agency’s data, lists Myriad’s myRisk test as fully covered under CPT code 81432.

One looming danger to Myriad’s pricing policy is if the agency examines the much lower price for multiple-gene panel tests offered by newer players when setting reimbursement levels: Invitae, for example, offers a test for $250 and Color Genomics is selling a similar one for $199.

Myriad Genetics: It’s Good to Have a Pal in the Senate

by Roddy Boyd, The Foundation for Financial Journalism
January 7, 2019

One thought on “Myriad Genetics: It’s Good to Have a Pal in the Senate”