Veteran card players pride themselves on their ability to discern what’s known as “the tell,” a series of involuntary mannerisms that can betray a rival’s strategic deceptions and even suggest a possible next move.

On rare occasions a tell metastasizes into a red flag, a clear indication that something is terribly wrong.

An example of the first is buried deep in a transcript of DaVita Inc.’s annual “Analyst/Investor Day” presentation in New York City.

These meetings were once a love fest for Kent Thiry, the kidney care provider’s

Those meetings are a little less rosy now, however.

At the May meeting, an analyst 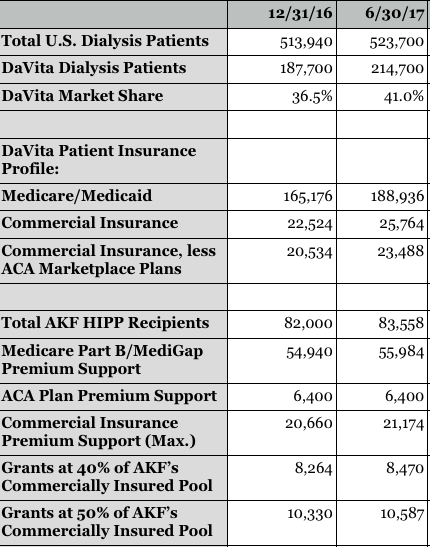 Having a few outlier contracts in force adds up, and quickly: Assuming three dialysis treatments a week for one patient, that $8oo daily differential between commercial and government reimbursement becomes $9,600 in a month and over a year, $115,200.

DaVita’s business imperative thus becomes simplicity itself: obtain as many commercially insured patients as possible, a plan congruent with its insistence that at current Medicare rates they lose money on 88 percent of their patients.

As gambits go, the AKF relationship is tactically a stroke of genius: the donations to the foundation are tax-free and given an estimated break-even threshold of $250 per dialysis treatment, DaVita’s ability to collect over $1,000 per session generates a heroic return on its capital.

The connection between the HIPP program remaining in effect exactly as it is and the happiness of DaVita shareholders is essentially the union of two sets — should HIPP be curtailed, or a hard cap of two or three times the Medicare rate be placed on commercial insurance payments, its investors could see earnings per share cut in half.

What’s remarkable about this daisy chain is that the AKF only has one condition to satisfy. In the 1997 opinion, the HHS stipulated that the AKF had to make the HIPP program available to qualified patients with end-stage renal disease, and as part of the evaluation process, were forbidden from using the level of support given the foundation by the patient’s dialysis provider as a criteria.

A growing chorus of voices, however, are alleging that the AKF has not lived up to this obligation.

A New York Times investigation last December described social workers at independent and smaller dialysis organizations as having difficulty in obtaining AKF grants for their dialysis patients. In several instances, according to the Times, social workers said that their patients weren’t eligible for HIPP because of their clinic’s inability to donate.

Additionally, a St. Louis Post-Dispatch story last October cited internal DaVita emails in which dialysis clinic-based social workers appear to have been prompted to steer dialysis patients to commercial insurance policies, away from Medicare and Medicaid.

The relationship between DaVita and the AKF prompted the U.S. Attorney for the District of Massachusetts to issue a subpoena to the company in January.

Dr. Teri Browne, a professor at the University of South Carolina’s College of Social Work, told the Southern Investigative Reporting Foundation that as a 10-year veteran of clinic-based nephrology social work for Fresenius and Gambro Healthcare (a company DaVita purchased in 2004), that DaVita patients were encouraged to leave government insurance for commercial plans solely to improve dialysis revenues. In her view, she felt that this was distorting the mission of the social workers to deliver the best information for the dialysis patient.

(Last September, in response to a Centers for Medicare & Medicaid Services request for Information from end-stage renal disease stakeholders on whether patients were being inappropriately steered to Marketplace plans, Browne filed this statement alleging that this practice was occurring on a regular basis, especially at large dialysis organizations.)

Referring to the current debate over whether DaVita is using donations to the AKF to boost its revenues, Dr. Browne said that as she interpreted it, “The 1997 [HHS] ruling was originally written to help people with the supplemental charges in Medicare and Medicaid plans.” She noted, “Based on what I from interviewing dialysis patients, and what my email listserv [of nephrology social workers] is discussing daily, steering patients away from Medicare is now a closely tracked part of their business.”

And “no one is saying that the AKF or its policies are all bad,” she said, “but [the fund] is [incentivized] to expand clinic-centered dialysis. The large dialysis organizations, who give the fund most of its money, are the obvious beneficiaries.”

Asked what the biggest concern she has with the state of dialysis today, Browne argued that dialysis patients switching to private plans from Medicare/Medicaid are often put at major financial risk should they get a transplant. (The AKF’s premium assistance doesn’t cover transplants.)

“Higher premiums and co-pays are the patient’s obligation if they get a transplant,” said Dr. Browne, who added “patients can harm their listing eligibility for transplants by switching.”

Both the AKF and DaVita have strongly denied, to the Southern Investigative Reporting Foundation and other press organizations, any linkage whatsoever between donations and HIPP enrollment. The AKF said it has taken a series of steps to clarify its policies rejecting any quid pro quo, and it submitted this statement to the CMS last September in defense of its practices.

DaVita’s Thiry, in a Sept. 17 question-and-answer session at a R.W. Baird conference, defended premium assistance as functioning exactly as intended, with everything “totally above board,” while acknowledging “[HIPP is] precipitating quite a political football.”

Thiry also used the R.W. Baird conference as an opportunity to defend the broader concept of switching to commercial insurance, describing the coverage offered dialysis patients as being “vastly superior” to Medicare/Medicaid. (There is no data to suggest that private payers have any better clinical outcomes with dialysis than those on Medicare or Medicaid.)

“When you lose money on 75% of your volume, you have to make extraordinary profits on the remaining minority. On average, our clients are charged 2,100% of the Medicare allowable amount for the same services. The average monthly charges for each [end stage renal disease] patient is $67,000 across our client-base. It is not unusual for monthly dialysis charges to exceed $85,000.”

Sarah Summer, associate general counsel and director of state policy for Blue Shield of California, took the opposite tack in this interview, claiming that “inappropriate third party payments” via AKF HIPP grants were part of “fraud gaming abuse” imperiling the health of insurers in the ACA Marketplace. Her arguments were amplified in Blue Shield’s Request for Information filing last September. Elaborating on the massive costs the San Francisco-based insurer alleges are shifted upon them, its statement described dialysis providers as using the AKF for “payment arbitrage” to capture up to $170,000 in payments per patient.

Blue Shield of California also stated that the burden of HIPP costs make it nearly impossible to remain economically vital: “Assuming a one percent operating margin for Blue Shield, it takes 3,800 members enrolled for 12 months to make up for a single dialysis patient enrolled by the American Kidney Fund.”

Notwithstanding the very real complexity of treating kidney failure, the fact of the matter is that DaVita made over $1.8 billion last year and its filings show that it hasn’t seen a sub-25 percent operating margin in ages. Those profits, common sense would suggest, come from its ability to push prices ever northward. The New England Journal of Medicine’s Catalyst blog, in an article in June, referenced a 2012 study from a trio of healthcare economists who, in analyzing the effect of competition on the quality of dialysis care for the National Bureau of Economic Research, found that’s pretty much what’s going on.

According to these economists, “average spending for DaVita and Fresenius patients rose about 50% from 2005 to 2009, to about $120,000 annually. Spending for dialysis patients in Medicare rose about 20% during that time, but reached only about $60,000 a year.”

More importantly, statistically speaking it doesn’t seem to matter who pays for treatments since U.S.-based dialysis patients face odds that are measurably slimmer than their peers across the globe. According to the University of California San Francisco’s Schools of Pharmacy and Medicine’s Kidney Project, as many as 25 percent of U.S. dialysis patients die in the first year of treatment, and only 35 percent survive as long as five years. The figures are even more stark when compared to a five year mortality rate of three percent for transplant patients.

The commercial insurers are not sitting on their hands and have taken to the courts to begin the work of pressing their interests, which mostly center around filling in DaVita’s moat.

Given that UnitedHealthcare’s primary line of legal attack is to frame the relationship between American Renal Associates and the AKF’s HIPP as a dubious “pay to play scheme” designed only to drive dialysis provider profits and not improve lives, the possible implications for DaVita and its interests are clear.

UnitedHealthcare alleges that the AKF’s administration of HIPP left little to the imagination about how little the fund adhered to the intent of the 1997 Department of Health and Human Services ruling, pointing to its “HIPP Honor System” whereby in the event dialysis providers were unable to “make fair and equitable contributions [to the AKF], we respectfully request that your organization not refer patients to the HIPP program.”

Through last autumn, UnitedHealthcare alleges in an exhibit attached to a filing made in June, this policy allegedly connecting HIPP grants to dialysis provider contributions was posted on the AKFs website.

Aetna is taking a different approach to addressing its costs from the AKF’s HIPP grants, at least for now. In April, it sued DaVita in Pennsylvania’s Montgomery County Court of Common Pleas to enforce what it claims are provisions in its contract with the company that allow it to examine data related to AKF HIPP grants awarded to Aetna members.

DaVita, naturally, disagreed that the contract has that provision and claimed that Aetna hadn’t followed the proper dispute resolution procedures. On the second-quarter conference call in May, Javier Rodriguez, the DaVita executive who runs its Kidney Care unit, told analysts that Aetna’s request was denied.

This isn’t the full picture of where things stand between Aetna and DaVita, though.

A Montgomery County judge rejected the emergency component of Aetna’s request but the balance of its litigation was left to proceed, a state of affairs Rodriguez termed “working with Aetna.”

Spokeswomen for both the AKF and DaVita declined to make executives available for phone interviews but provided written replies to emailed questions. DaVita was provided with the model used to determine the connection between AKF HIPP grants and its profitability, as well as the clip of Thiry talking at the J.P. Morgan conference. While dismissive of the Southern Investigative Reporting Foundation’s questions as biased, a spokeswoman declined requests to elaborate on what, if anything, was incorrect.

Corrections: The original version of this story carried an incorrect number for DaVita’s U.S. patients. According to the company’s third-quarter 10-Q, it is 194,600 not 214,700. Additionally, a reference to a published report that provided an inaccurate estimate of the combined Fresenius and DaVita market share was deleted.

by Roddy Boyd, The Foundation for Financial Journalism
September 22, 2017