Executives at Insys Therapeutics have continued to pressure its employees to develop new ways to mislead insurance companies into granting coverage to patients prescribed its drug Subsys, even as the Food and Drug Administration’s Office of Criminal Investigations is issuing a stream of subpoenas to former employees.

As reported in a December Southern Investigative Reporting Foundation story, Insys’ prior authorization unit (also known internally as the insurance reimbursement center) employees were trained and rewarded for saying anything, including purportedly inventing patient diagnoses, to get Subsys approved. The revelations illuminated the answer to the conundrum raised in our previous stories: How does a company marketing a standard fentanyl spray formulation, under a strict FDA usage protocol, easily double the insurance approval rates of its more established competitors?

Internal Insys documents and an audio recording of a prior authorization unit meeting show that as recently as the late autumn executives were frantically brainstorming new ways to get around increasingly stringent pharmacy benefit manager rule enforcement.

“[Pharmacy benefit managers] had begun to deny Insys’ [prior authorization] requests in the early autumn to the point where it was rare to get more than two dozen approvals per week for the unit,” said ex-prior authorization staffer Jana Montgomery (a pseudonym) and something that began to accelerate after the CNBC reports came out.

“That’s a big change from each employee getting 25, at least, per week.”

Unlike their sales unit colleagues, Insys prior authorization staffers can’t call on long standing professional relationships with prescribers or use speakers program cash to win business. They are hourly workers — albeit among the higher paid prior authorization staff in the medical industry — dealing with other hourly workers and both have little latitude to depart from established scripts. If the pharmacy benefit manager denies the coverage, Insys has few levers to pull, apart from beginning an appeals process.

As critical reports began to pile up in the 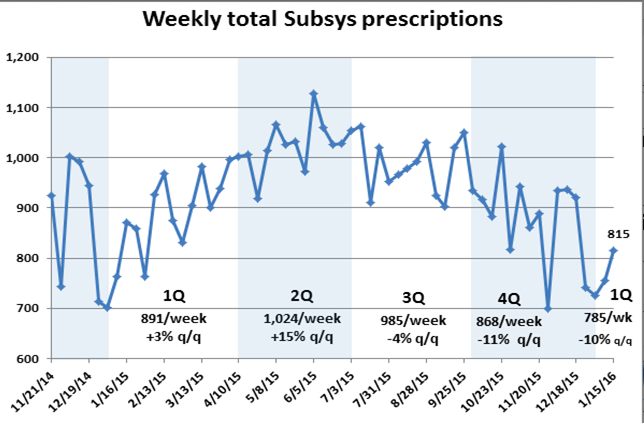 The number of Subsys prescriptions filled in the third quarter dropped about 4 percent from second quarter levels and the erosion accelerated in the fourth quarter, falling an additional 11%.

Thus far in January, the new year has not brought much in the way of promise, with the 815 prescriptions reported for the week ended Jan. 15 down 6 percent from the comparable week a year ago. Subsys’ share of the transmucosal immediate release Fentanyl market, which hovered near 50 percent for most of the summer, has now fallen below 45 percent.

Jana Montgomery was given a pseudonym because of her cooperation with an ongoing federal investigation. Her account of prior authorization unit practices was read to two of her former co-workers who agreed with her characterization of “the spiel” and declining pharmacy benefit manager authorizations.

As is the case with prior Southern Investigative Reporting Foundation investigations, everyone named in the story was called repeatedly on mobile or home phones and left detailed messages about what we sought comment for. When possible an email was sent as well. As of publication, no one replied.

A detailed message was left on Insys general counsel Franc Del Fosse’s mobile phone seeking comment on these subjects. As of press time the call had not been returned.

The Brotherhood of Thieves: Insys Therapeutics

by Roddy Boyd, The Foundation for Financial Journalism
January 25, 2016